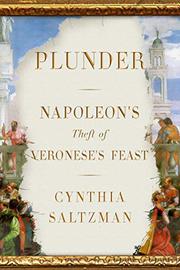 How stolen art enriched the Louvre.

For Napoleon Bonaparte, artworks represented trophies of military success, might, and power. Prominent among the thousands of pieces his army looted from Italy, Prussia, Austria, and Germany, and displayed with bravado in the Louvre, was Paolo Veronese’s Wedding Feast at Cana, “a vast, sublime canvas that in 1797 the French tore from a wall of the monastery of San Giorgio Maggiore in Venice.” That Renaissance painting is central to Saltzman’s well-researched, discerning history of art as well as the art of war. As Bonaparte rampaged through Europe, he stipulated that “artistic indemnities go into the terms of peace,” forcing those he conquered to give up paintings and sculpture “as part of the reparations of war.” Even the pope capitulated to Napoleon’s demand for 100 artworks from the sumptuous Vatican holdings. Among the extraordinary pieces that Bonaparte plundered, the Veronese was outstanding: “a banqueting scene with life-sized figures and an illusion of reality so convincing that the feast appeared to be taking place in the open air.” Saltzman recounts the laborious process of removing the painting, then more than 235 years old, wrapping the stiff canvas around cylinders, transporting it for weeks on shipboard, and, finally, restoring it. “To put the canvas up on the wall,” writes the author, restorers “would have to build a new stretcher, patch some 360 holes, and retouch these repairs and any other places that had been abraded or left bare.” The project took three years. After Napoleon’s military defeats and downfall, nations that had been looted negotiated for the return of their art. The Veronese, though, was not among the repatriated works. Though it was removed from the Louvre several times for safekeeping during wars, it hangs still, testimony to Napoleon’s compelling desire to be seen “as an Enlightenment leader, an intellectual, and a friend of the philosophes.”

An engrossing, tumultuous history of a Renaissance painting.