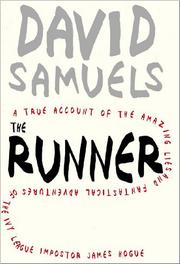 The absorbing and often bewildering story of an imposter and thief, “a convicted fabulist who attempted again and again to impose the freaks of his imagination on the world around him.”

Expanding on his 2001 New Yorker article, Samuels follows the trail of James Hogue, a talented long-distance runner born in 1959 and raised in a working-class neighborhood in Kansas City, Kan. Despite being perceived as having a discipline problem, Hogue was recruited in 1977 to run at the University of Wyoming. The next decade of his life story is riddled with holes, long blank spaces and calculated distortions—the life of a drifter constantly seeking a new identity. On March 30, 1988, a detective investigated Hogue’s self-storage unit in St. George, Utah, and found a wide variety of stolen items. More than a decade later—after Hogue had been arrested multiple times for theft and fraud—Samuels would tour his house in Telluride, Colo., and discover countless other items stolen from friends, neighbors and acquaintances. “His goal went beyond simple theft,” writes the author. “He was aiming to assemble a new self out of the bits and pieces of other people’s lives.” The idea of creating a new self took on a yet another dimension when Hogue, at the age of 29, decided to start anew by forging an application to Princeton University. Under the identity of Alexi Indris-Santana, a self-educated ranch-hand and outstanding long-distance runner from the Southwest, Hogue was accepted to the class of 1992, but deferred his enrollment for a year while, unknown to Princeton officials, he served a prison sentence in Utah. Once on campus, the reputation of “Sexy Alexi” grew as he regaled professors and fellow students with fabricated stories of travel and adventure. A coincidental run-in with a girl who recognized him from high school brought a quick end to his elaborate ruse, and Hogue was sentenced to five months in jail. After his release, he disappeared once again, surfacing in the late-’90s in Telluride, where he would be arrested once again. In addition to a probing examination of the motivations of a unique charlatan, Samuels offers pointed sociological commentary on such diverse topics as lying, the flawed college-admissions process and the single-minded dedication of long-distance runners.

The chronology is often difficult to follow, but the author spins a dizzying, exhilarating tale of deception, duplicity and the search for personal identity.