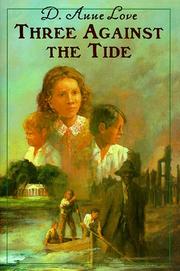 THREE AGAINST THE TIDE

In an absorbing historical novel from Love (My Lone Star Summer, 1996, etc.), three children flee their South Carolina Sea Island plantation, hoping to find their father, who is off spying for General Lee. Neglected by the neighbors who were supposed to care for them, the three Simon children quickly discover that they’re not up to managing on their own; when all the slaves disappear, Susanna, 12, and her younger brothers pack what they can and set off for Charleston. After a wild, nearly disastrous boat ride, they arrive, but only to find that they’re still on their own, in a town rife with rumors of an imminent Yankee invasion. Left homeless by a fire, they set off again, this time for General Lee’s headquarters. An independent sort who prefers trousers to dresses, Susanna finds that her sheltered, motherless life has left her little prepared for supervising slaves, keeping house, or even finding food for herself and her brothers; she muddles through, and is rewarded by a meeting with the godlike Lee, who expedites a joyful family reunion. Love establishes a strong sense of era with perceptive comments from slaves and slaveowners alike, keeps the plot speeding along, and in Susanna concocts a winning mix of intelligence, strong will, and naãvetÇ. (Fiction. 11-13)