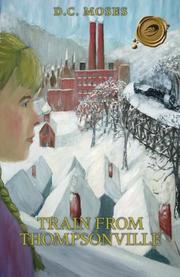 A coming-of-age novel about a Polish-American Catholic girl growing up in and escaping blue-collar life in upstate New York during the Great Depression and World War II.

Moses (Second Thoughts, Second Chances, 2015, etc.) relates the early years of Joanna Ludak, a girl living in the company town of Thompsonville with her immigrant family. It’s a tale of evolving freedom but increased cares and responsibilities for Joanna. She attends a strict parochial school, where a nasty nun and pedantic priest treat her unfairly. Moving on to a public high school, she begins to flower, excelling in her studies, finding her first love, and making friends. Meanwhile, her father, Joe, an orphan with a fourth-grade education, barely scrapes by doing piecework at a shoe factory, and her mother, Bertha, takes a job during the war to help make ends meet. Looked down upon by deeper-rooted Protestant families in town, Joanna’s family struggles. An in-law does succeed in home construction, but Joanna’s father is too proud to ask him for a job. Joanna breaks up with her first boyfriend, Daniel, after her best friend admits she’s been dating him as well. The novel concludes with Joanna heading off to college on a train, fulfilling a long-held fantasy of “her very own train from Thompsonville” to leave her grim hometown. Moses’ lengthy novel is uneven. Its main strength lies in laying out the brutal realities and basic unfairness of life—particularly for the young—and the struggle to rise above. Precocious Joanna succeeds thanks to her intelligence and grit. The book’s weaknesses include its length and lack of action; nothing much happens in a narrative of interiors and emotions that can seem unending. The writing can be very good, with lucid, detailed descriptions of people and places and an occasional much-needed dash of humor, but it also can ponderous and bombastic, with exhaustingly long, sinuous sentences clogging the pages. Compared with these faults, the narrative’s penchants for overusing quotation marks and weak passive verbs are merely annoying.

A long slog that might appeal to readers interested in the experience of Eastern European immigrants in 20th-century America, particularly their youthful female progeny.