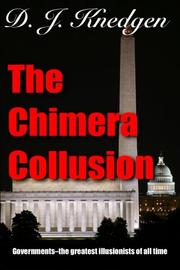 An action-packed political thriller that rotates between multiple characters and their dark, dangerous worlds.

In Knedgen’s debut novel, U.S. politics are a means to achieve world domination by any means necessary. This includes drugging a young woman named Kim into wooing high-level politicians into bed, where she ultimately kills them. The goal is to eliminate the competition so that the power-hungry overlords win the presidential election and commence their reign of control through the media, in wars, regulations and more. However, the drugs’ effects start to wear off, and memories of Kim’s victims begin to haunt her. The impact of these flashbacks debilitates Kim and causes her to question everything. If it weren’t for Street and Angie, who help her put the pieces of the puzzle together, Kim would be lost for good. These intriguing, well-developed characters have a surprising number of layers to them. In particular, Street, who spends his days hustling on the street corner, works hard to maintain his tough facade, but his soft underbelly reveals itself when it comes to his Grandma Mae. After listening to Street’s conversation with his grandma over the phone, Angie and Kim “saw him in a new light. Kim couldn’t resist.” “Keep that to yourself,” Street says. “Can’t have my image being ruined.” However, the depth of conspiracy in the political turmoil can be hard to digest since there are an implausible number of bad guys with corrupt agendas. In addition, the story is at times unnecessarily violent. In the first chapter, for example, a brutal scene of a woman being attacked is foisted upon the reader. While the blunt impact of this opening was perhaps meant to act as a lure, it ultimately feels more like an assault on the senses.

An intriguing ride through the bumpy landscape of U.S. politics, with a healthy dose of deception and corruption.