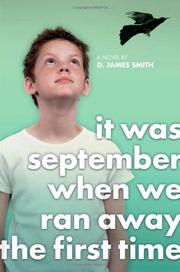 IT WAS SEPTEMBER WHEN WE RAN AWAY THE FIRST TIME

Sixth-grader Paolo describes what happens when his ten-year-old cousin Billy falls in love with Veronica, a Chinese-American girl, against community mores in central California in 1951. Third in a series that began with The Boys of San Joaquin (2005), this is a similarly nostalgic take on growing up Catholic in the middle of a large Irish-Italian family. Paolo, Billy—who is deaf and speaks only in sign—and Paolo’s six-year-old brother Georgie have considerably more independence than children of today do. Readers will be intrigued by their imaginative play, and their preparations for the church’s all-inclusive October festival and Halloween trick-or-treating. But the heart of the story is Billy and Veronica’s attachment. “Most round here still haven’t warmed up to Chinese persons,” Paolo explains, and rock-throwing, a burned-down tree house and graffiti on the garage lead to a breakup and, later, running away. Full of homespun philosophy and advice, this leisurely told tale may appeal to readers who have enjoyed the work of Brian Doyle. (Historical fiction. 9-12)