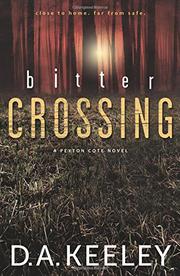 A border agent tries to break up a smuggling ring in this series debut.

U.S. Border Patrol agent Peyton Cote knew what she was getting into when she asked for a transfer from Texas back to her hometown of Garrett, Maine. The tiny border town is in Aroostook County, which has a landmass as great as Connecticut and Rhode Island combined and two chief sources of income: potatoes and trees. Its highly forested border with New Brunswick makes it an ideal port of entry for smugglers, and Peyton is poised to make a drug bust from a tip she got from a high school classmate. She’s astonished when the sack she finds in a potato field contains not primo marijuana but a baby. As a single mother, she’s glad she saved the infant, but she’s frustrated about the drug bust that didn’t go down. Her informant steers her toward her high school history teacher, a University of Maine professor and a Boston lawyer who are working together for what they insist is a good purpose. Peyton has her suspicions, however, as she does about her brother-in-law and the possibility of a turncoat agent on the job. Her ex-husband’s hope of getting back together with her, attentions from other single men in Garrett, the disappearance of the rescued baby, two shootings and the obligatory moose incident add to the complications in Peyton’s attempts to do her job and rebuild a life in her hometown. Though Peyton’s far from the warmth of Texas, her diligence, courage and fortitude—qualities she developed in a region where winter begins in October and seems to last forever—serve her well in her personal and professional challenges.

Despite a few lapses in style and continuity, Keeley (This One Day, as K.A. Delaney, 2014, etc.) writes convincingly about New England and the rugged people who call it home.