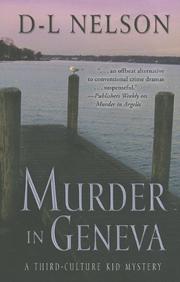 A young freelance writer who specializes in history must solve both a very old puzzle and a brand new murder.

Annie Young arrives in Geneva to find her friend Mireille pregnant by Dr. Urs Stoller, her brilliant but much disliked thesis advisor. No one is terribly upset when Stoller’s body washes up on the lakeshore. His wife, a chemist, is more concerned about problems with the blood thinner she’s working on and the fact that her lover is moving his family from England. Stoller, who was not above stealing work from his graduate students, has even given Mireille false information about some old drawings she’d asked him to appraise. Annie’s in town to work on a catalog for a big sale a local auction house is hosting, but she gladly takes on the task of tracking down the artist who executed Mireille’s drawings, a woman struggling to express herself in the restrictive Calvinist society of 16th-century Geneva. Annie’s fiancé, Roger Perret, a French police chief on an exchange program in Geneva, is at odds with the local police, who arrest Stoller’s wife for his murder. Also in Geneva are Annie’s American parents, who have taken in Stoller’s teenage son, a longtime pal of Annie’s, while their determined daughter works to help find a killer and uncover the fate of the talented young woman whose story so fascinates her.