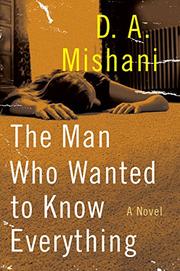 THE MAN WHO WANTED TO KNOW EVERYTHING

Avraham was prepared for changes when his Slovenian girlfriend, Marianka, agreed to leave Brussels to join him in Holon, just south of Tel Aviv. But having the lovely Marianka, who knows no Hebrew and understands little about Israeli culture, by his side in his tiny apartment day after day is still a shock to the system. Nor is he ready to face Marianka’s parents’ distress at seeing their daughter abandon a promising police career in her adopted country to face an uncertain future. Instead of being able to sink into comfortable routine at work, Avraham lands his first murder case as lead investigator. Leah Yeger, who years earlier was the victim of rape, is found beaten to death in her apartment. Her rapist is still locked up, but Avraham can’t shake the feeling that her murder is connected to the earlier crime. District Cmdr. Benny Saban, his boss, dogged by an internal sexual harassment complaint, wants a quick resolution. He urges Avraham to focus on Yeger’s son. Avraham is more interested in the report by Leah’s neighbor that a policeman visited her on the day she died. As at home, where he faces a constant matrix of decisions about how much to share with Marianka, at work he must decide how much to submit to authority and how much to venture on his own in his pivotal first case.

Once again, Mishani offers a case in which the pleasure lies not in the destination but in the journey.