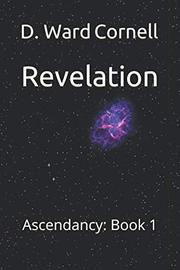 Cornell’s debut novel, the first in a series, sees a benevolent alien ambassador take steps to unite the peoples of Earth.

Michael is an amateur astronomer living on the Big Island of Hawai’i. His accurate predictions of supernova events gain him public recognition, but he becomes much more famous when he commandeers every TV and radio set on the planet to reveal himself as an alien ambassador. It turns out that Michael represents the Ascendancy, the diplomatic branch of the Intergalactic Confederation of Planets, and has come to Earth to help humanity save itself—first, from the disastrous effects of climate change, and then from a far-distant, unnamed peril. To achieve this, he offers wondrous technology to all nations who will ally themselves with the Confederation, including machines that will provide free food and energy as well as personal security and medical treatment. The response to Michael’s announcement is telling; people who meet him personally are quickly won over, but governmental authorities are equally quick to label him a threat. What follows is a battle for the hearts and minds of various nations around the world. Can Michael break down the barriers of political and religious ideologies? Cornell constructs a simple third-person narrative that, due to its focus on diplomacy, is quite heavy with conversation. This dialogue is also repetitive in places, but there is, at least, a sense of realism in how Michael provides similar answers to similar questions. Less understandable is the characters’ sameness; Michael and his diplomatic staff, for example, are all unfailingly polite and reasonable and always quick to praise others; these attributes rub off on the humans they meet so that nearly the entire cast begins to resemble a happy, homogeneous family. To be fair, this togetherness is thematic as well as stylistic. Cornell envisages in detail how humanity could actually become unified and identifies, beneath the SF trappings of Michael’s mission, commonalities that could allow for this. There is, however, little sense of danger or even interpersonal conflict. The distant peril remains distant, and, to a degree, this is refreshing, but it won’t be to everybody’s taste.

An intelligently envisioned manifesto for human progress despite a lack of tension.