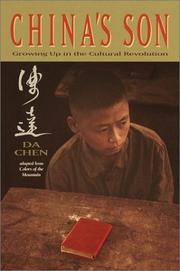 Growing Up in the Cultural Revolution

Adapted from his work published for adults, Colors of the Mountain (1999), this autobiography of a landlord’s son growing up as a pariah in his village in the ’60s is gripping and funny. Da Chen is a good student, but he drifts in and out of school with the political climate, in many ways choosing the path of least resistance, but also holding onto the things that move him—history and music. As the youngest, he is encouraged by his family to pursue his studies, as all his older siblings have been forced into farming. Da Chen’s narrative moves smoothly, communicating setting and character with an immediacy that will draw young readers in. It is nearly word-for-word the same as Colors of the Mountain. For the most part, the deletions are non-essential to the story, although many of them would have made the cultural climate depicted clearer to young readers. It seems that the reason for the adaptation is primarily for length—although it’s unlikely that the missing hundred pages would have made the difference between a young person deciding to read this or not. (Autobiography. 10-15)