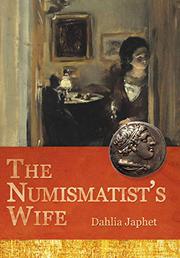 Japhet tells the story of a German Jewish woman’s search for love and God during World War I in this debut historical novel.

Dana Newman discovers an ancient Roman coin at a Stormville, New York, flea market in 1999, which reminds her husband’s relative of an old family story from Germany. Ilse Ehrenkrantz, who was 17 in 1912, fell in love with her stepcousin Georg, a skilled fencer and womanizer who decided to join the Prussian Army. He was also a numismatist—a coin collector—and he sent Ilse a necklace made from a Roman denarius that bore the image of Apollo. Ilse’s father, a Jewish publisher, was doing well, but some of his friends complained about persistent anti-Semitism. Ilse, meanwhile, felt confined by her life in Munich’s middle-class Jewish community. Her interest in religious-themed art led to curiosity about Christianity itself, and she began to associate more with the Christian girls at her school. “I want God to enlighten my heart,” she told her sister. “I want faith, perhaps faith in Jesus as Savior and Redeemer, as Messiah. I want to understand the religion which inspires artists so powerfully.” Georg, too, thought of converting—a necessity for becoming a Prussian officer. However, Ilse risked losing the love of her family if she turned her back on Judaism. As war loomed on Germany’s horizon, Ilse had to decide whether her infatuations—with Georg and with Jesus—could sustain her through what was to come. It was a decision that would reverberate through the rest of the century. Japhet’s prose skillfully evokes the early-20th-century period, from the diction of the characters to the details of their clothes and furniture. The novel’s depiction of upwardly mobile Jews in prewar Munich and Berlin opens up a world that one rarely sees portrayed in fiction, and one gets the sense of what assimilation meant to some of the members of Ilse’s generation. It’s a mannered novel about wealthy people, calling to mind the work of such authors as Edith Wharton or E.M. Forster, and its pace mirrors the literature of the time in which most of it is set. For all the talk of art and aspiration, however, the author ensures that history’s horrors are never far below the surface: “When I came to Germany, there was a famine in Berdichev,” recalls Sara, a poor immigrant who would later become the wife of a wealthy businessman and take Ilse under her wing. “Starving villagers stole bread from the children of others, and especially from poor Jewish children…be glad you have never seen hunger, and mothers watching their children die.” Japhet manages to weave the histories of the Jewish people, Germany, socialism, and art into the narrative, providing context that makes the actions of the characters feel tragically inevitable. The frame narrative, set in 1999, feels largely unnecessary, as the primary plot builds toward a conclusion that’s mostly satisfying, if slightly predictable.

A finely crafted novel about family, identity, and the precariousness of comfort.