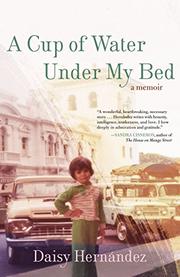 A CUP OF WATER UNDER MY BED

A journalist’s account of growing up between cultures and learning to embrace both her ethnic and bisexual identities.

Former ColorLines magazine executive editor Hernández (co-editor: Colonize This!: Young Women of Color on Today's Feminism, 2002) was raised as the first-generation American child of a working-class Colombian mother and Cuban father. For her, “everything real”—from family conversations to the observations of her beloved aunts to favorite TV shows—happened in Spanish. However, her family wanted their daughter to achieve more in life than they could, so learning English “to become white” and Americanized became the goal they impressed upon their daughter. Yet as Hernández came to understand, learning a language that was hers by nationality but not by ethnicity meant growing away from her family and adopting the attitude that she had “no history, no past, no culture.” The break was not easy; so much from her colorful dual heritage formed the bedrock of her identity. In her parents’ world, saints performed miracles, and cups of water could carry messages between the living and the dead. In that world, too, women married (or avoided) certain kinds of men. As Hernández grew into adulthood and sexuality, she fulfilled her parents’ desire to find a “gringo” boyfriend. At the same time, she discovered a desire for lesbian and transgender women. Her family castigated Hernández for her bisexuality but also lauded their daughter for finding middle-class success as a New York Times reporter. Striving to be true to herself as a queer (rather than queer and whitewashed) Latina, she eventually took a chance writing for a social justice magazine in San Francisco. Warm and thoughtful, Hernández writes with cleareyed compassion about living, and redefining success, at the intersection of social, ethnic and racial difference.

Personal storytelling at its most authentic and heartfelt.