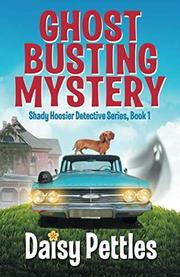 Senior sleuths search for ghosts, gold, and a missing dachshund in Indiana.

Sixty-seven-year-old Ruby Jane “RJ” Waskom narrates this debut mystery. RJ and her best friend, 71-year-old Veenie Goens, work as detectives-in-training with “the best—okay the only—PI agency in Knobby Waters.” The women share a house and a car (a turquoise 1960 Chevy Impala), and they like to keep an emergency pie on hand. Their neighbor Dode Schneider, who “wasn’t right in the head even before that snowplow hit him,” hires them to investigate the apparitions he claims he’s seen by the apple orchard at the Wyatt mansion, abandoned nearly 100 years ago by Jedidiah Wyatt, one of the town’s founding fathers. Wyatt operated the local bank, but when it failed in 1919, in part because a flood washed away the crops that were the residents’ source of income, he rowed out of soggy Knobby Waters with all the gold and other valuables he stole from the institution’s vault. About the only thing left in the safe was a note that read “Adios, folks.” Intrigued by the tale of the stolen gold and committed to the ghost hunt, the gumshoes also answer an ad about a missing dachshund. Finding Puddles, a much-loved pudgy “wiener dog,” would bring in a welcome reward. Plenty of silliness mixes with multiple mysteries in Pettles’ very funny series opener. Wacky but, for the most part, charming characters populate Knobby Waters. Among the townspeople are junior police officer Devon Hattabaugh, whose mutton-chop sideburns “bushed out like squirrel tails,” and Ma and Peepaw Horton, who operate an always-open pie pantry in their tool shed. Unlike most female detectives in mystery series, crusty RJ and Veenie lack any kind of civility and clearly get joy out of what others would find frightening. When agreeing to take on the paranormal assignment, RJ reckons that she and Veenie have been outwitting living people for quite some time, and “how much smarter could the dead be?” Descriptions and dialogue are clever, amusing, and often quotable. Perhaps the only unfortunate thing about the book is its uninspired title. The author, born in a small Indiana town, writes with knowledge and affection about a quirky cast of Hoosiers.

A spirited beginning to a new mystery series that’s haunted with humor.