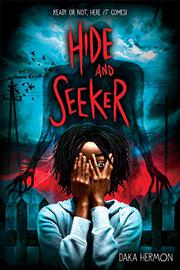 Justin and his friends play their last game of hide-and-seek at their friend Zee’s not-so-welcome–home party.

Zee had gone missing one week after Justin’s mother passed away just one year ago, and the party is celebrating his return. But the emaciated Zee is acting strangely, mumbling rhymes about a Seeker that will take them all. Shortly after the party, one by one, Justin’s other friends begin to disappear. It doesn’t take long for the remaining members of the crew to figure out that Zee’s strange behavior may be connected to the disappearances. Justin, Nia, and Lyric set out on a trail of clues and possible suspects, hoping to find their missing peers. No sooner do the details of the mystery begin to come to light than Justin, the last of the group, is unwillingly transported into the realm of Nowhere. In this parallel universe, the Seeker keeps children hostage, feeding off of their fears. This dark nail-biter, set in a small Tennessee town and featuring a largely African American cast (Lyric is the only white kid), weaves a creepy spin on a childhood game that quickly slips into a Stephen King–esque tale of horror. Can the children trapped in Nowhere gather as allies to evade the Seeker and get home?

A chilling debut—like the Seeker, a tale that doesn’t let you go.