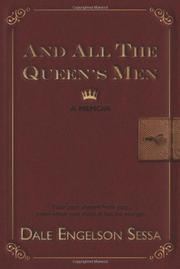 AND ALL THE QUEEN'S MEN

An unabashedly honest, introspective and moving debut memoir focusing on the author’s relationships with the men in her life.

Sessa grew up in a Philadelphia suburb, dealing with her long-suffering mother and emotionally abusive father—a central influence on her later outlook on relationships. However, her family lived a life of luxury, traveling around the country and spending summers in Beverly Hills, Calif. While vacationing there as a teenager, the author met Ellis, a handsome man from a wealthy family whom, due to pressure from her father, she married while still a teenager. Although at first she was dazzled by Ellis and his lavish relations, her naïveté, youth and unhappiness soon became evident: “[B]ehind this illusion, evenings and weekends with Ellis seemed endless, like sitting in a stalled car.” After several years in an unhappy marriage, she divorced Ellis and married Myles, a doctor who was far more charming and sexually compatible. Soon, however, her second marriage felt like a prison, and she grew to despise her husband’s sexual advances and hostility. She threw herself into her career as a TV commercial producer in New York City and took several lovers as a means of escape. Twenty years later, she divorced Myles and dated a series of boyfriends, including Aaron, an attractive ad executive, and Art, a retired art dealer. Through these men, the author writes, she learned how to be in a loving relationship while balancing her own independence and aspirations. She experienced true love, heartbreak, anger, and even the death of a close friend before she married her third husband, Joe, with whom she says she’s the happiest. Sessa is a talented storyteller, and her candid, poignant and often sassy prose allows readers to relate to her young-adult immaturity, her later pain and frustration and her eventual joy. She successfully weaves together her different experiences with men into a powerful, thought-provoking message: One must turn mistakes into positives in order to grow and learn from one’s past.