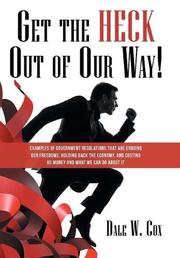 GET THE HECK OUT OF OUR WAY!

Examples of Government Regulations That Are Eroding Our Freedoms, Holding Back the Economy, and Costing Us Money and What We Can Do About It

A treatise argues for a small federal government and fewer regulations.

Debut author Cox contends that running a business in America is far more complicated than it needs to be: “If the government would get out of our way, there is no limit to where we as a people could take our country and ourselves.” How exactly does the government interfere? The author maintains that the federal government in particular is too large, too full of redundancies, and too imposing to allow regular Americans to live their lives (and operate their businesses) as they see fit. The government creates complex regulations (for example, the “Clean Air Act”), passes laws that are thousands of pages long, and seeks to redistribute wealth from people who have earned it to those who have no qualms about taking it. In the author’s opinion, there should be “no departments, bureaus, or commissions that are not absolutely necessary for protecting our freedoms” (although he supports “smart but generous” defense spending). He has a simple message for those in office: “Don’t try to give me what you think I deserve.” To illustrate his views, the book is full of personal experiences that range from installing a water heater without a plumbing license in Massachusetts to encountering problems trying to subdivide land in North Carolina. And while a screed attacking big government is nothing new (and the author notes influences that include Bill O’Reilly and the Heritage Foundation), the book is at its best when describing vivid personal experiences. Pages devoted to the difficulties of owning a mobile home park paint a very specific picture of how trying it can be to deal with the government. When a resident in the park sparks a court battle over a companion animal, it is apparent how the legal system can seem alarmingly whimsical. But some of the author’s more extreme views, such as his attack on the minimum wage, do not gain a lot of traction. Cox presents a good case that laws should be easier to understand and the government should be more transparent. But ideas about abolishing some child labor laws and removing FDA regulations are quixotic at best.

This book’s personal experiences provide depth but some of the broader, economic generalizations remain unconvincing.