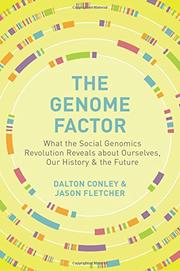 What the Social Genomics Revolution Reveals About Ourselves, Our History, and the Future

A fresh look at the nature vs. nurture debate and the role of race in shaping intelligence and personality.

Conley (Sociology/Princeton Univ.; Parentology, 2014, etc.) and Fletcher (Public Affairs and Sociology/Univ. of Wisconsin) explore one of the main contentions made by Richard Herrnstein and Charles Murray in their 1994 book, The Bell Curve: that “social policy to promote equal opportunity is counterproductive since individuals have reached the level of social status best suited to their native abilities.” Admittedly, there may well be “a gene for aggression,” but whether it lands a person in jail or a corporate boardroom depends on social factors. The subtleties inherent in the nature/nurture debate are often illuminated in studies of family dynamics. Surprisingly, the authors have found strikingly different educational outcomes within families due to the complex relationships between parents and siblings—e.g., when parents favor kids with athletic skills. The authors debunk the explanation that genetic superiority is a determining factor in the relationship between class and race and put the positive effects of racial diversity under the microscope. The relationship is also a product of “migration patterns from thousands of years ago” as well as cultural taboos regarding marriage. Ethnicity does play an important role, write the authors, but this may be explainable by proximity and rivalry for resources rather than genetics. Nonetheless, genetic diversity may be desirable because it offers protection against diseases. One classic example was the decimation of Native Americans due to the introduction of smallpox by colonists. Conley and Fletcher speculate about the future and how our increasing knowledge about the genome will directly shape mate choice, a more specific variant of our current preferences regarding race and appearance. They also touch on the possibility of genetic engineering, which would allow wealthy parents to produce designer-engineered offspring of their choosing. Six appendices briefly explore more technical issues such as epigenetics.

An illuminating look at what the brave new world of the future may hold.