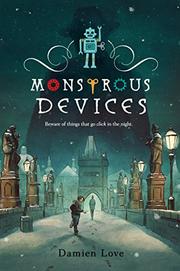 A young British teenager’s ordinary world takes a sudden spin to the dark side with the arrival of an antique toy robot that turns out to conceal a terrible, and terrifying, power.

Hardly has Alex unpacked the robot sent by his grandfather than he cuts himself on a sharp edge so that a little blood seeps into its workings. Cue the weirdness, starting with a homework assignment he doesn’t remember finishing and a bully who inexplicably beats a sudden retreat. It quickly escalates into a headlong flight with his grandad and a running fight with a squad of varied but uniformly scary automatons fueled themselves by blood. What’s up? Alex’s robot, it turns out, was crafted to hide a tablet inscribed with the secret name of God that Rabbi Loew used to animate his legendary golem…and nefarious parties are out to revive the clay monster for—well, nothing good. Confused, terror-stricken, and inarticulate throughout, Alex comes off as a pale character next to his creepy adversaries and, in particular, his dapper, glib, secretive, martially adroit, scene-stealing grandfather. Still, as events move along apace, he proves surprisingly resourceful. Love tucks in plenty of icky bits, along with cinematic set pieces and hairbreadth escapes, and he strews enough tantalizing hints about his protagonist’s murky past to excite interest in sequels. The human cast presents white.