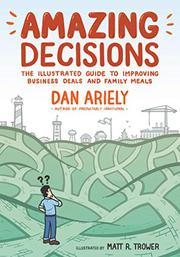 The Illustrated Guide to Improving Business Deals and Family Meals

Ariely (Psychology and Behavioral Economics/Duke Univ.; Payoff: The Hidden Logic That Shapes Our Motivations, 2016, etc.) and illustrator Trower break ranks to show that money isn’t everything.

There are social norms, and there are market norms. The two do not always coincide: People do things in the market for financial reasons, but they do things in the social sphere out of love, loyalty, desire, and other nonmonetary considerations. According to the author, deciding which norm to put to work is the basis of good decision-making. In an early example in this engagingly illustrated graphic tour, Ariely depicts a character who decides that it’s only right to reward his in-laws with cash in return for their having cooked him a fantastic Thanksgiving dinner. Such a person would rightly be thought a clod even though he would err in the other direction by leaving a restaurant without paying. Situational thinking, then, is in order, and as Ariely’s “social fairy” alerts the poor guy, “you completely missed the point of a social exchange.” Ariely provides a number of other examples, based on economic research, showing that people are not always motivated by money, even in the marketplace. A simple cash bonus often does not prompt better productivity, while a meaning-laden, human expression of appreciation goes a long way. Ariely counsels that thinking about where values and rewards align is the proper way to arrive at decisions about how to motivate workers, how to encourage charitable donations and voting, and other such things. As he writes, winningly, “we can strategically use social norms or market norms to encourage people to act in the best interests of themselves, those around them, and their world as a whole.”

As is usual with Ariely, the dismal science is rendered anything but dismal with the use of provocative real-world examples of how people actually do things outside of the textbooks.