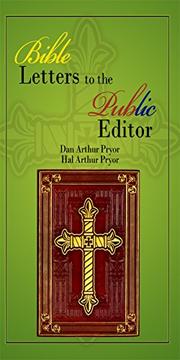 BIBLE LETTERS TO THE PUBLIC EDITOR

A debut collection of letters addressing moral issues from a Catholic perspective.

This slim volume represents a compilation of essays, written by Dan Pryor and his father, Hal Pryor, from 1994 to 2016, and sent to the editors of various New Jersey and Pennsylvania newspapers, including the Newark, New Jersey-based Star-Ledger, and the Easton, Pennsylvania-based Express-Times. Although written by two different people, the missives are very similar in content and tone. The elder Pryor’s letters seem more associated with answering specific, published items, while the son’s most often discuss general issues in the news. They tackle such subjects as abortion, homosexuality, and suicide from a Catholic point of view, which the younger Pryor says is “the only view from which I am confident to write.” It’s a conservative viewpoint, including anti-abortion and antigay stances and a strong reliance on church hierarchy and teachings, and it seems aimed at readers who already agree with these stances. As Pryor notes in a page on “Getting Letters Printed in the Newspaper,” he found that “Explaining the intangible religion to society is difficult.” Over time, however, he realized that, “Earthly comparisons to moral/religious issues make the intangible religion a tangible acceptance.” Therefore, Pryor does effectively use comparisons to day-to-day life and simple analogies (such as the well-known metaphor of the frog in boiling water), as well as simple, accessible language. Both authors are straightforward and unapologetic in sharing their view that Catholicism holds the final answer regarding moral issues. The younger Pryor, especially, cites specific Bible verses to back up his points. The letters are sometimes choppy in style and often end abruptly, but they’ll be easily understood by any reader.

Direct, heartfelt religious essays that mostly preach to the choir.