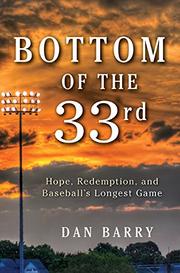 BOTTOM OF THE 33RD

On a frigid evening in April 1981, 1,740 Pawtucket, R.I., Red Sox fans settled into their seats for a game with the Rochester Red Wings of the AAA International League. With the score tied 1-1 at the end of regulation, the teams played on. And on. On past 12:50 a.m., when the curfew provision, mysteriously missing from that year’s edition of the rule book, would have suspended the contest; on past the 21st inning, when each team maddeningly scored a run; on past the 29th and record-tying inning; on past 4:00 a.m., the bottom of the 32nd, when the league president was finally reached and ordered the umpires to suspend the contest. Wittily and gracefully, Barry works out his Easter themes of hope and redemption, providing, of course, an account of the game, but most memorably capturing the atmosphere of the city and the stories of the people who shared this weird moment in baseball’s long history: the players, two headed for the Hall of Fame, a few who would establish substantial major league careers, scrubs who would never make it, others only on their way to or back from the proverbial cup of coffee in the bigs; the dutiful umpires and the team managers, baseball lifers both; the hardy double-handful of fans who stayed the course, including a father and son bound by their promise never to leave a game; the clubhouse attendants, batboys and devoted player wives; the makeshift radio broadcasters and jaded newsmen sentenced to cover the game; the millionaire, blue-collar PawSox owner and the dismal team and decrepit stadium he inherited; the burned-out but still-defiant city of Pawtucket, where baseball would, indeed, eventually rise from the dead. When play resumed two months later, the entire baseball world descended upon the stadium, eager to participate in the historic game’s conclusion, prefiguring the enthusiastic attention Barry’s wonderful story richly inspires.

Destined to take its place among the classics of baseball literature.