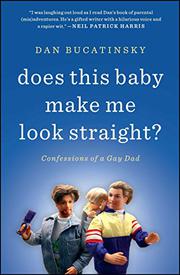 DOES THIS BABY MAKE ME LOOK STRAIGHT?

Confessions of a Gay Dad

Actor, writer and producer Bucatinsky muses on being a gay parent of two adopted children.

Bucatinsky, a co-creator of the Showtime TV series Web Therapy, and his husband, the director and screenwriter Don Roos, adopted a girl, Eliza, in 2005, and a boy, Jonah, in 2007—both from the same mother. The author chronicles the adoption process and the highs and lows of his experiences raising two young children. In the early sections, which focus on the adoptions, the author touches on similar territory as Dan Savage’s 1999 book The Kid (which Bucatinsky mentions approvingly), but where Savage’s book was moving and witty, Bucatinsky’s is mostly shallow and trite. Among his banal observations: that both gay and straight parents argue about how best to raise kids; that married couples have sex less often after kids come along; and that What to Expect When You’re Expecting doesn’t anticipate every parenting question. Bucatinsky obviously thinks that bodily functions are a rich source of comedy, but readers will tire after the fourth or fifth story about urine and/or feces. He also devotes multiple pages to his opinions regarding female genitalia and details a failed attempt to shave his own testicles. Throughout, the author employs a style that suggests an overeager blogger desperate for approval.