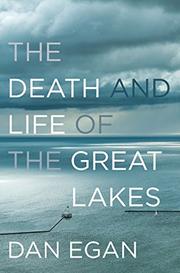 THE DEATH AND LIFE OF THE GREAT LAKES

An alarming account of the “slow-motion catastrophe” facing the world’s largest freshwater system.

Based on 13 years of reporting for the Milwaukee Journal Sentinel, this exhaustively detailed examination of the Great Lakes reveals the extent to which this 94,000-square-mile natural resource has been exploited for two centuries. The main culprits have been “over-fishing, over-polluting, and over-prioritizing navigation,” writes Egan, winner of the J. Anthony Lukas Work-in-Progress Award. Combining scientific details, the stories of researchers investigating ecological crises, and interviews with people who live and work along the lakes, the author crafts an absorbing narrative of science and human folly. The St. Lawrence Seaway, a system of locks, canals, and channels leading to the Atlantic Ocean, which allows “noxious species” from foreign ports to enter the lakes through ballast water dumped by freighters, has been a central player. Biologically contaminated ballast water is “the worst kind of pollution,” writes Egan. “It breeds.” As a result, mussels and other invasive species have been devastating the ecosystem and traveling across the country to wreak harm in the West. At the same time, farm-fertilizer runoff has helped create “massive seasonal toxic algae blooms that are turning [Lake] Erie’s water into something that seems impossible for a sea of its size: poison.” The blooms contain “the seeds of a natural and public health disaster.” While lengthy and often highly technical, Egan’s sections on frustrating attempts to engineer the lakes by introducing predator fish species underscore the complexity of the challenge. The author also covers the threats posed by climate change and attempts by outsiders to divert lake waters for profit. He notes that the political will is lacking to reduce farm runoffs. The lakes could “heal on their own,” if protected from new invasions and if the fish and mussels already present “find a new ecological balance.”

Not light reading but essential for policymakers—and highly recommended for the 40 million people who rely on the Great Lakes for drinking water.