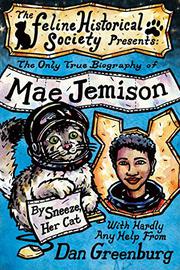 THE ONLY TRUE BIOGRAPHY OF MAE JEMISON BY SNEEZE, HER CAT

A cat biographer interviews the first Black female astronaut in this second installment of a children’s book series.

Former NASA astronaut Mae Jemison wrote an autobiography, Find Where the Wind Goes (2001), and she has been the subject of many works for children. Now, the true story of her life is told—by her cat, Sneeze (“with hardly any help” from author/humorist Greenburg). In this entertaining and informative book for ages 8 to 12, Sneeze, who speaks English as well as “cattish,” interviews Jemison about her childhood, when she was “always in motion…jumping, climbing, falling, and dancing.” Sneeze also explores influences, events, challenges, and Jemison’s own inexhaustible drive that launched her into space and history. Greenburg’s series opener was The Only True Biography of Ben Franklin by His Cat, Missy Hooper (2020). The author’s light touch in this sequel doesn’t trivialize the serious aspects of Jemison’s story, including her experiences with racism. Greenburg allows Sneeze’s puzzlement over why color should matter to send its own message. Jemison remembers the assassination of the Rev. Dr. Martin Luther King Jr. and being frightened as much by the violent turmoil that erupted as by the armed National Guardsmen marching past her family’s house. She describes what it was like to be a 16-year-old freshman pursuing chemical engineering at Stanford University and facing dismissive professors. Cornell University Medical College, stints as a young doctor in Asia and Africa, and other notable accomplishments followed before Jemison realized her childhood dream aboard the Endeavor space shuttle in 1992. At Sneeze’s prompting, Jemison describes astronaut training and space travel in absorbing detail. A few diverting digressions from the biography reflect the cat’s interest in such subjects as Africa’s most lethal animals and how a litter box might work (or not) in weightless conditions. (The latter is part of the gross and engrossing chapter “How Astronauts Poop in Space and Do Other Stuff.”) Hill offers black-and-white, cartoony illustrations. The stirring book ends with Jemison’s astonishing post-NASA career.

This inspiring, relatable life story is in the good hands (er, paws) of a biographer.