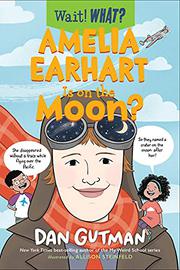 AMELIA EARHART IS ON THE MOON?

From the Wait! What? series

Siblings Paige and Turner, who both present Black, challenge each other’s Earhart knowledge as they share information about the famous pilot. There is no narrative as such. Written as a conversational exchange of facts between the two, the book covers aspects of Earhart’s life including her daredevil youth, a timeline of her impressive flight achievements, her unorthodox marriage to publisher G.P. Putnam, and her life as a celebrity. Even readers who are already well versed in Earhart lore may learn something new, such as the fact that astronaut Buzz Aldrin’s father helped prepare Amelia for her solo flight across the Atlantic. Young readers will enjoy the entertaining antics and background on her childhood, and lively illustrations complement the text. The infodump format moves readers from topic to topic briskly, providing an overview of Earhart’s life and career rather than an in-depth analysis. Many details are packed into a short book, which means that some heavier aspects of her story get a brief treatment that borders on irreverent. Gutman chose to include facts about Earhart’s first car, which she named “Yellow Peril,” in a section of additional facts; this racist term is glossed over rather than addressed with readers. (The reference to the car’s name will be removed in subsequent printings.)

Not a standout on the Earhart shelf.