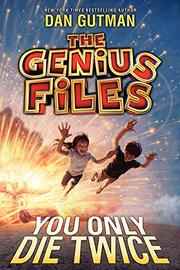 YOU ONLY DIE TWICE

From the Genius Files series, volume 3

Teen brainiacs Coke and Pepsi McDonald’s cross-country jaunt runs out of gas on its third leg, despite continued silly predicaments and threats of sudden death.

Giving up even a pretense of plausibility, Gutman introduces a new nemesis, masked impersonator Evil Elvis. He joins the bad guys collected in previous episodes for prepared ambushes as the twins and their clueless parents explore a string of tourist destinations—real ones, with photos and Google Maps directions provided. Opening with a teaser for a predicament that doesn’t happen for over 200 pages and isn’t the climax, the author shepherds the McDonald RV from July 4th fireworks on the National Mall to similarly spectacular but more destructive ones at Graceland. They stop along the way at places like the National Jousting Hall of Fame (Mount Solon, Va.), South Carolina’s cheesy, Mexican-themed South of the Border tourist trap, and, inevitably, the Coca-Cola and Pepsi museums (Atlanta and New Bern, N.C., respectively). Imbedded in near-constant infodumps about these and many more roadside attractions that are mentioned but skipped, the various coded messages, captures, rescues and narrow escapes become predictable and repetitive.

Like the increasingly quarrelsome McDonalds, readers will be feeling travel fatigue long before the author’s concluding teaser for Book 4.