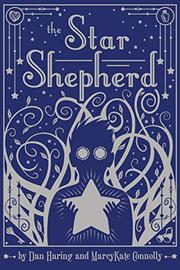 Stars are falling, and the people who usually send them back up aren’t able.

Kyro’s father, Tirin, works as a Star Shepherd. He watches the skies all night. When a star falls to Earth nearby, Kyro and Tirin run outdoors, scoop it up, and catapult it back to the sky before dawn. Each star is different: One’s a “strange, molten thing, with light leaking out over its curves”; another “shimmer[s] like liquid silver but [i]s as light as a handful of feathers.” But something’s wrong: Stars are falling in daylight and in clusters, the gaps they leave in the dark sky allowing ancient, evil creatures into the world. When Tirin disappears, Kyro, with pal Andra (a girl who’s more supportiveness trope than person), embarks on a desperate journey to find his father. The plot begins as a wondrous celestial fable with some steampunk elements—cogs and gears; clockwork; star cases of “glass and metal with hooks built into the design and angled just right to catch on the edges of the sky.” But it morphs surprisingly and disappointingly into a story of combat featuring sentient, mechanical giants and fire-breathing spiders with slimy black webbing. The final battle slogs, and the plot’s reveals are reported listlessly. However, the star premise shines throughout. Kyro, Tirin, and Andra seem white or light-skinned.

A mixed bag: Fights and reveals are lackluster, but the stars and steampunk glow.