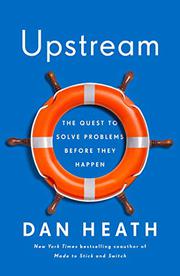 The Quest To Solve Problems Before They Happen

Psychology meets neuroscience and self-help in this engaging study by business writer Heath (co-author: The Power of Moments: Why Certain Moments Have Extraordinary Impact, 2017, etc.).

If the fish floating down a river have three heads, then it behooves any curious-minded person to travel upstream and find out why. Just so, if half of high school students are failing in a certain district, then one can either try to throw money and words at the problem (“Stay in school, kids!”) or venture into the alien territory outside the classroom to find out how to keep them going. That’s just what happened in Chicago, writes Heath, where teachers formed interdisciplinary teams offering support to legions of at-risk students, determining that if first-year students can be kept on track, they’re likely to stay in school to the end—and wind up making at least $500,000 more over a lifetime as compared to their dropout peers. The author examines numerous turning-point moments when finding “upstream” things to fix might have led to better and different results. For example, when, in 1974, a scientific paper was published describing a disappearing ozone layer, that was the time to do something about it—not now. “Creating urgency” is one task the would-be problem-solver must address. Another is getting the right people on board to create desired effects, such as lowering teen drug use by making it outré: “What if drug and alcohol use came to feel abnormal in their world rather than normal?” A change of mindsets is rarely easy, but it can be done, and best so, by Heath’s account, by looking farther along at the chain of events than the problem itself. That habit of mind, he writes, helps explain why the incidence of death by thyroid cancer is so low in South Korea, and it also points to a central truth: “Systems have great power and permanence; that’s why upstream efforts must culminate in systems change.”