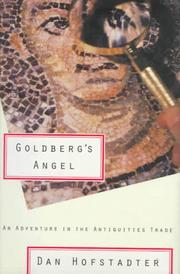 An Adventure in the Antiquities Trade

Hofstadter's (Temperaments, 1992) account of being on the trail of fraud in the international antiquities trade is as full of intrigue, shady characters, and exotic hotel lobbies as the latest spy thriller. But this is a true story. It begins with Peg Goldberg, a former Indiana social worker turned amateur art dealer, who goes to Amsterdam in 1988 with the intention of buying a Modigliani for $3 million. Instead, she returns from Geneva having paid $1.2 million for four Byzantine mosaics. When she tries to sell her rare booty, though, the Republic of Cyprus sues her for the return of stolen national treasures—and wins. Determined to get back her treasure and prove that the Cypriot government was really a willing smuggling accomplice posing as a patriotic innocent, Goldberg, ``a Swiss Army knife of a girl,'' sets out on a high-speed, international cat-and-mouse quest, which Hofstadter follows with mounting enthusiasm. From the wealthy suburbs of Indianapolis to the corridors of power in Cyprus, they track leads and vanishing sources. The colorful cast of characters includes a Dutch con man with a penchant for high-priced hotels and accordion music; an American who began his smuggling career shipping parrots and ocelots; a Montenegran named Savo, who says he predicts avalanches for a living but is rumored to be Mafia; and a Turk whose name, history, and appearance change so often, he may only be an alias for multiple traffickers. Is it simply a high-stakes hoax or is it an international conspiracy? The final answer reamins unknown. Hofstadter is a reporter and adventurer who manages to speak to almost all the players under the protective mantle of ``writer.'' With sensual prose and keen psychological portraits, he presents an incredible look at a labyrinthine world. Hofstadter's description of a colorful, dizzying trip through Istanbul's Grand Bazaar is a perfect metaphor for his own quest: ``unmappable, seductive, perilous.''