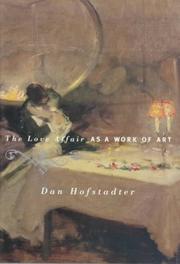 THE LOVE AFFAIR AS A WORK OF ART

Stylish, insightful narratives of exemplary love affairs- -liaisons conducted in French, during the Romantic period and the Belle Epoque, when intellectual talk and passionate correspondence lent formal brilliance to the work of love. The luxurious prose that New Yorker contributor Hofstadter (Goldberg's Angel, 1994, etc.) crafts here provides the perfect medium for transmitting the extravagant stylings of his subjects, French literati active during the years 17961834 and 18871915. Presenting evidence drawn from their public and, moreover, their private writings, Hofstadter shows how their romantic effusions shaped their lives to aesthetic ends. His story begins with the sentimental novelist Madame de Charriäre, who fairly late in her life established a deep yet apparently platonic relationship with the youthful Benjamin Constant. Constant left her for the celebrated author Madame de Staâl. Later, after emerging from de Staâl's influence, he would write an extraordinarily misogynist novel, Adolphe—based, ironically enough, on his mentor Madame de Charriäre's Caliste. Madame de Staâl's protegÇes also included Juliette RÇcamier, who fell for the Vicomte Chateaubriand, whose Memories from Beyond the Tomb Hofstadter presents as a brilliant achievement of memory and of lying. Hofstadter moves on to develop a second, similar picture of literary romance. This time the work of Marcel Proust, who modeled many of his characters on his contemporaries, provides the focus. Key actors include the novelist Anatole France; his lover, the salonniäre LÇontine de Caillavet; and her son, Gaston, who competed with Proust himself for the affections of Jeanne Pouquet. Like Chateaubriand, Proust inevitably brings the topic around to memory and its vicissitudes. Hofstadter, for his part, hesitates to draw any resolutions from them for our time. He stresses instead the gulf that lies between these worlds of letters and our own society. Hofstader's recreation of French romanticisms exemplifies the art of collective biography. But without larger conclusions, his tale, however artfully crafted, remains a mere melodrama of literary life.