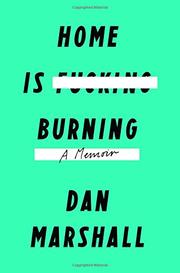 In his first book, a 20-something recounts his battles with caring for a mother fighting cancer and a father with Lou Gehrig’s disease.

As a young professional newly graduated from college, Utah native Marshall was on top of the world. Not only did he and his siblings come from wealth and live with “the proverbial silver spoon jammed firmly up our asses”; he also had a job and girlfriend he loved in Los Angeles, a city he enjoyed for its “traffic and pollution and assholes speeding around in BMWs.” The one shadow on his good fortune was having a mother sick with cancer. But even that difficulty was one Marshall and his family had overcome thanks to his father, a man who had held chaos at bay with his unflagging devotion to them all. Then one day, Marshall learned that his father had been diagnosed with ALS, a disease that was “a real ugly motherfucker and…pretty much a death sentence.” At first, the family tried to carry on their lives as though nothing had changed. However, less than a year after the diagnosis, Marshall’s siblings told him that he needed to come home to help care for both parents. It was then he realized that “life [wasn’t] all about gin and tonics and sunsets.” For the next year, Marshall watched as his once healthy and active father declined into near total helplessness and his traumatized mother reeled from chemotherapy and drugs that addled her brain. Relationships between him, his siblings, and his friends strained to the breaking point. Marshall then had to face his own personal losses, which included the end of a long-term relationship he believed would culminate in marriage. Though the author’s potty-mouthed profanity can be trying, the book is funny, heartbreaking, and unapologetically crude. Strangely enough, as Marshall is forced into awareness of life’s harsher realities and grows up, his linguistic coarseness gives way to a narrative that manages to be quite touching.