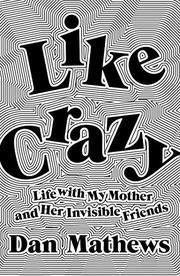 Life With My Mother and Her Invisible Friends

Mathews, the senior vice president for PETA, chronicles how caring for his feisty septuagenarian mother led to the discovery that she suffered from undiagnosed mental illness.

When the author’s mother, Perry, developed chronic obstructive pulmonary disease, he brought her to live with him in Virginia. A self-identified “gadabout,” Mathews worried about his decision. A quirky loner, Perry had a history of erratic behavior, and the author was profoundly uncertain he could manage the responsibility of caretaking. But from the moment she arrived, his footloose gay bachelor life not only stabilized, but also became more colorful. His friends—as well as readers of his first memoir, Committed—adored her sass and “avant-garde, pro-homo” attitudes. However, in addition to COPD, Perry suffered from heart problems, incipient deafness, chronic arthritis, and balance problems that sometimes caused her to fall. On occasion, she also heard voices. At first, Mathews believed that these sounds were the result of drug interactions and helped his mother cut back on her medication. Meanwhile, the author began coming into his own as the adult he never thought he could become, settling into a relationship with a man newly emerged from a heterosexual marriage. Perry’s moods continued to darken, and she began struggling with the proliferation of the voices in her head. A psychotic break forced Mathews to commit her to a mental hospital, where doctors diagnosed her with schizophrenia. He continued to care for her until she died, seeing in her not a “tragic victim” but a “weary survivor” who single-handedly raised three successful children without ever “succumb[ing] to drugs or booze or violence.” A playful and humane writer, Mathews drolly examines parent-child role reversals as he meditates on the meaning of watching a beloved parent come to terms not only with mortality, but also a devastating illness.

Poignant, readable, and even fun despite the dark moments.