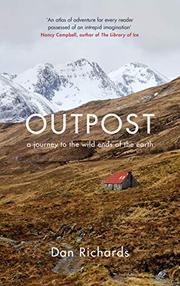 Literate journeys to some of the world’s less-traveled places, seen through an unusual lens.

British travel writer Richards (Climbing Days, 2016, etc.) comes by his wanderlust naturally. Before he was born, his father spent time in the remotest reaches of Svalbard, the Arctic island chain, from which he brought home a polar bear’s pelvis. As he writes in an arresting opening, the object fascinated Richards, but more so the thought of living in a shelter such as the one his father called Hotel California, which a bear would probably tear apart in a minute. “An unremarkable garden shed, the only thing that makes it a shed of note is the fact it’s there, stood on Svalbard,” he writes before embarking on a fascinating series of journeys. There are the literarily famous sheds, of course, such as Thoreau’s cabin at Walden Pond and the one Jack Kerouac scaled a mighty Cascade peak to groove in, guided by Gary Snyder. Richards climbed the same mountain, having eaten a burger the night before with the admonishment that the joint would be dead, “D.E.D. Ded,” in a quarter-hour, “the most American thing ever said.” The author also traveled to Iceland to visit “houses of joy,” which serve as “refuge stations for travellers crossing the hinter/highlands,” joy-giving spots that offer shelter from the storm, “modern bunkhouses on ancient foundations.” Some of the sheds, huts, and shelters Richards chronicles are works of art, literally, such as a Danish construction called Shedboatshed: “I liked it the moment I saw it as a shed at Tate Britain and took an even greater pleasure in it once I’d learnt its backstory.” Others are invested with meaning, such as the Japanese mountain stronghold called Nageire-dō, “the Oz of shrines.” The author was also able to travel to Svalbard to have a look for himself.

Readers who prize outdoor experiences—and tiny houses and the simple life—will find this book a source of much pleasure, bears and all.