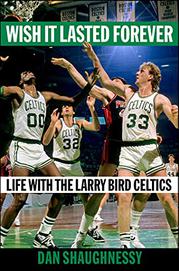 Life With the Larry Bird Celtics

A veteran Boston-based sports journalist writes of the glory days of the Celtics.

Dubbed “Scoop” for his abilities to dig out stories no one else got, Shaughnessy, an associate editor at the Boston Globe, takes his title from an exhortation by Hall of Fame player Bill Walton. Said Walton of the Celtics in the 1980s, “You cannot overemphasize in your book how much fun this was….It was what you dream about and I wish it lasted forever.” Long since retired, Larry Bird would agree. He had a hardscrabble youth in a small town in southern Indiana, quit college and a sports scholarship, and clawed his way back into play by finding the right NCAA team and the right coach, all of which brought him to the Celtics. The team had long since served as a model for other NBA teams for its low-ego play and ethnic inclusiveness, and it took seriously an ethos about which Shaughnessy writes, simply, “Basketball is the game for everyman.” True, it’s catholic and forgiving, but basketball of the sort that Bird and teammates, such as the irrepressible M.L. Carr, played was a different matter entirely. Shaughnessy’s high point is the championship run of 1984, when the Celtics defied a powerful Los Angeles Lakers to take the crown. Throughout, the author is amiable and self-effacing, but the best parts of his book are the you-are-there accounts of the on-the-hardwood battling in a contest so fierce that Laker Kareem Abdul-Jabbar was forced into an oxygen mask to recover, “a disturbing visual for folks watching back home in LA.” Goofy and often funny, Shaughnessy’s book offers considerable insight into the making of a winning team in the hands of players whom some consider to be the greatest in the history of the game.

A treat for fans of the old Boston Celtics and for roundball fans generally.