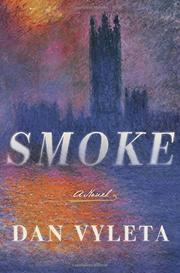 “We thank the Smoke” is a mantralike phrase that’s used by characters throughout this exciting, fearful fantasy novel by Vyleta (The Crooked Maid, 2013, etc.). His previous novels explored social paranoia, distrust, and fear, and he’s now bringing these same topics to a scary imagined world. Meet two young, upper-class best friends, Thomas Argyle and Charlie Copper, at what appears to be a classic English public school—except it isn’t. This is a world where children are born in sin, where Smoke emanates from their bodies when they lie or think a bad thought, and the purpose of this school is to cleanse them of the Smoke. Bleak House had its fog; in this world Smoke surrounds people, staining their clothes (only lye or urine will get it out). As children grow older, “Good begins to ripen.” Why? Can it be changed? Over Christmas holidays, Thomas and Charlie meet a girl named Livia, a prefect at another school, the attractive daughter of Baron and Lady Naylor. Following up on something shocking Lady Naylor tells Thomas changes the novel's trajectory into one familiar to Philip Pullman and C.S. Lewis readers—the quest. Thomas, Charlie, and Livia are off to London and its old, abandoned halls of Parliament, where they’ll seek answers about Smoke and the maleficence behind it. We root for these appealing characters as they face one dreadful obstacle after another. Although the novel is primarily told in the third person, many chapters are in the first person, narrated by a wide variety of characters, which helps the reader become more deeply invested in their adventures. Even though it’s somewhat derivative of other books in this vein and loses its way at times, the novel's sumptuous, irresistible narrative—filled with plenty of twists and turns and imagination—will satisfy any reader.

A terrific, suspenseful tale that could definitely cross over to the teen audience. Sequel, anyone?