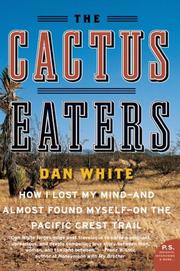 Journalist White and his girlfriend Melissa tackle the Pacific Crest Trail, Mexico to Canada and all the many miles and weather developments in between.

They both worked at a small newspaper in Connecticut. He was a book-smart nerd with a deep-seated need to rebel; she was professionally ambitious but with an appetite for adventure. They fell for each other and, in an act of sublime ignorance, decided to knock off the 2,650-mile Pacific Crest Trail in one summer-long act of youth and bravado. That was ten years ago, which has given White time to recover from their trail-trial-by-fire and to find some humor in the story. White and Melissa encountered a typical gallery of blowhards, weirdos and good Samaritans on the trail. They desert-fried and snowfield-froze. They found scorpions in their boots and swarms of ticks everywhere. The food was scary (and so was the diarrhea). But they also saw peach-colored mornings and lavender evenings; they skinny-dipped and made love. Drawing on diaries he kept at the time, White polishes up these memories, serving them forth with brio and dash. But he also unsparingly portrays his selfish ways as he gradually descended into an edgy and anxious frame of mind. He was raw: a buffoon, quixotic when not churlish. Readers will laugh with the author as he delivers one-liners (“It changes you when you bite your first cactus”), but they will also steam at his solipsistic antics and become unnerved when they see him making critical decisions with decidedly impaired judgment. No wonder Melissa broke up with him after the big hike.

Brings a fresh perspective to the timeworn adventure-travel genre.