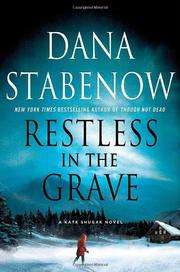 RESTLESS IN THE GRAVE

Alaskan p.i. Kate Shugak goes undercover as a favor to her boyfriend, State Trooper Jim Chopin, and finds herself yet again in deep trouble.

Jim’s friend, State Trooper Liam Campbell, is investigating a plane crash that he suspects is no accident. Although Finn Grant had almost as many enemies as the population of Newenham, the chief suspect is Liam’s wife Wy. Grant, who’d married into a famous Alaskan family, had recently been buying up every air-taxi service, lodge and plane he could get his hands on to build up his fixed base operation (FBO), located on a former air force base. When Kate and her half-wolf Mutt arrive in Newenham, she’s lucky to get both a job as waitress in the town’s most popular bar and an apartment over the garage of Tina Grant, Finn’s widow. Soon Kate and Mutt are attacked and thrown into a freezer in her apartment, presumably by someone looking for something. Trying a little breaking and entering herself, she searches the office in the main house and sneaks out to the airport office, where she hits the jackpot: a thumb drive containing information on Finn’s blackmail schemes. But she still has to figure out where he got the millions to invest, why his wife refuses to spend a penny of his money and what he was planning for the big cargo planes that were next on his buy list. Her hunt for answers puts her in danger, but she’s never one to give up. Stabenow offers Kate (Though Not Dead, 2011, etc.) and Liam (Better to Rest, 2002, etc.) a combination of fast and furious adventure and the beauty and complexity of Alaska.