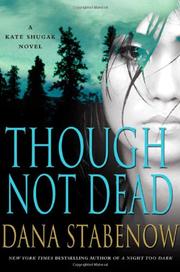 Alaskan native Kate Shugak (A Night Too Dark, 2010, etc.), former investigator for the Anchorage DA, investigates her own family’s past.

When he dies, Kate’s uncle and foster father, Old Sam, leaves everything to Kate, along with a letter telling her how to distribute his property. While packing up Sam’s extensive book collection, she finds an old diary. But before she’s read very much of it, someone bashes her in the head and steals it. The theft is only the first in a series of dangerous encounters. After she’s run off the road, attacked and shot at while checking out Sam’s property in the remote Canyon Hot Springs area, she realizes that Sam had something someone badly wants, and that Sam’s life must hold the clues to what she needs to know. So she travels around Alaska digging up information. A cryptic note saying only “Find my father” leads her to Sam’s Army service in the World War II Aleutian campaign, where he met Dashiell Hammett and apparently his real father, a con man and thief who had stolen a precious Russian icon. With her boyfriend, State Trooper Jim Chopin, off in the lower 48 for his father’s funeral, Kate has only her half-wolf Mutt and her prodigious skills in surviving Alaska’s often brutal conditions to help her find the truth.

Kate’s latest presents both a fascinating puzzle and an in-depth look at life in Alaska, past and present.