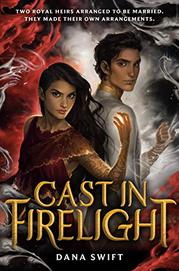 From the Wickery series, volume 1

Pledged to each other since childhood, Adraa and Jatin navigate the complex politics of their respective kingdoms.

Adraa is the heir to Belwar, and while powerful in most types of magic, she has yet to take the royal ceremony to prove her competency in all nine forms and, with it, her right to someday rule. With half its population Untouched by the Gods—unable to use magic—Belwar struggles with inequities between the Touched and Untouched, reminiscent of societal class divisions. Adraa’s strong sense of duty to her people leads her to fight against the corruption within her kingdom. Jatin, heir to their more magical neighbor Naupure, has spent years polishing his nine colors of magic at the academy, away from the realities of ruling. He and Adraa compare their magical prowess and progress through letters. When Jatin finally leaves the academy, a series of mishaps results in both of them hiding their true identities even as they grow closer in their fight against a ruthless gang. This intricate world with magic-fueled, action-packed fight scenes and snarky, colloquial banter is loosely infused with Asian Indian cultural references. The story also discusses questions of gender inequality, freedom, self-worth, and identity. Adraa and Jatin both have black hair; in contrast to the cover image, the text makes clear that Adraa is very dark-skinned while Jatin has lighter brown skin.

Will appeal to fans of fast-moving fantasy adventures.