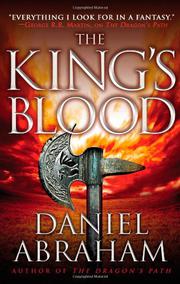 From the Dagger and the Coin series, volume 2

Marcus Wester and company return to work their magic and mischief among the Firstbloods, Kurtadam and Southlings.

Whether you’re a fantasy buff or not, you have to admire ace storyteller Abraham’s skill at building plausible alternate worlds, a trade much practiced, but not often so well, ever since the days of Tolkien and the Shire. Picking up where The Dragon’s Path (2011) left off, Abraham reintroduces us to his mixed-bag company of heroes and villains, inserting some timely touches in his aoristic universe—for one thing, fiscal troubles that the assembled kings of his European-ish landscape seem disinclined to solve together, and for another, a struggle between the forces of reason and an entrenched priesthood, “Palliako and his Keshet cultists,” as one of the good guys puts it. Or are they good guys? One of the many strengths of Abraham’s storytelling is that he allows a little moral ambiguity to curl around the toes of his characters; the heroes aren’t 100 percent virtuous, while the bad guys sometimes have a few redeeming qualities. Good thing, too, for it’s a mixed-up, violent world in which Cithrin bel Sarcour, “voice of the Medean bank in Porte Oliva,” now finds herself, and a smelly and unsanitary one at that; she’s inclined to appreciate differences of cultural tendency as long as the bottom line isn’t harmed, whereas others are more keenly aware that she is a “half-Cinnae girl in a well-tailored dress,” less so that Cithrin has perforce been playing hanky-panky with the books. Did we say that the bad guys had their good sides? True enough, but there is evil aplenty for Wester and his merry band to battle, even if others are inclined to let such things sort themselves out; as one says, “Bring swords to the border, and a few men’s follies become a tragedy for thousands.” Indeed, and you never can tell what sorts of follies the Haaverkin and the Tralgu and such are going to cook up.

Another trademark romp in the otherworld, and a lot of fun.