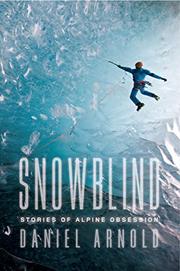 This debut story collection is a gutsy, up-close look at mountain climbing around the world.

Arnold is an outdoor writer whose nonfiction work focuses on climbing (From Salt to Summit, 2012, etc.). He's an active climber himself, and this book rings true, examining the lives of those who are lured to the mountains. Subcultures always have their own languages, and Arnold has his down: “The angle ratchets out toward vertical. Ann pounds a half-hitch piton to the eye…threads a bight through her handle-modified GriGri, and clips the end to the piton.” That writing typifies the rhythm and rich language that drive all the stories in this collection. “The Cleaning Crew” is a somber look at a climber losing his partner during an unimaginable storm on the rock. He tells the tale to find relief but receives no sympathy from the other climbers at a hostel in Argentina. “No Place for Vagabonds” feels like an epic travelogue told by a guerrilla climber who's asked to join a major, industrialized expedition to K2. Chase Vox describes the group, awestruck and repulsed: “We were a small country. The rich and powerful doing bizarre stuff at the top while the workers labored at the bottom.” But there's a twist—a hippy named Wind who shadows the expedition and sets Chase’s mountain ethic on its ear as he accomplishes what no one else can. “Cowards Run” is outdoor writing at its best, delivered in a tale of two 17-year-old boys living an impossible summer; it starts with the storms of the sea and ends atop Mount Fairweather. In this book, the top is the point.

Arnold has crafted a fierce book for those who know the game—and for the rest of us, who can vicariously push through our fears of the wild.