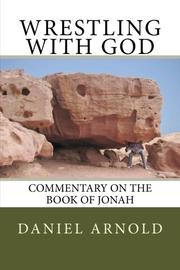 Commentary on the Book of Jonah

An exhaustive exegesis of the Book of Jonah.

Arnold’s debut work of biblical analysis (first published in French in 2004 as Jonas. Bras de fer avec un Dieu de grâce) takes its subject from one of the shortest books of the Old Testament, which is only 48 verses long. As Arnold points out, it takes only 10 minutes to read it, yet it’s also one of the Bible’s best-known tales. It tells of the prophet Jonah who flees when God calls him to testify to the wicked Ninevites. He boards a ship heading in the opposite direction, but a storm overtakes the vessel. The terrified crew wake Jonah and ask him to pray to God, but he instead advises them to simply throw him overboard to calm the storm. They do—but Jonah doesn’t drown; instead, a great beast of the sea swallows him and carries him for three days before spitting him back up on land. Jonah then preaches to the Ninevites and they repent. For thousands of years, this story has pleased casual readers and baffled scholars intent on unearthing its deeper meaning. Arnold breaks his own study into two sections. First, he provides readers with a long, detailed introduction to the Jonah story and its critical reaction over the centuries, and then he offers a “commentary” section in which he reads Christian and Jewish significance into the book. This commentary will only be as effective as its readers’ beliefs allow; for example, a section on the actual historicity of the tale of Jonah will be particularly unconvincing to nonbelievers, who will likely see it as an obvious fable. However, the author’s prolonged introduction to those 48 verses is a brilliant, thrilling work of textual scholarship that stresses not only Jonah’s similarities to other major Old Testament figures, such as Elijah, but also teases out the character’s “messianic typology” as he’s taken out of the world for three days and returns with a redemptive message. While examining the moment that God commands Jonah to prophesy to a foreign people, Arnold writes, “Jonah’s mission is unique in the Bible.” That one-of-a-kind story gets a first-rate critical appreciation in these pages.

A comprehensive, intensely readable analysis of the broader significances of a well-known biblical tale.