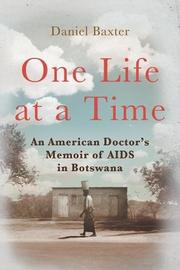 ONE LIFE AT A TIME

An American Doctor’s Memoir of AIDS in Botswana

A distinguished doctor tells the story of his years working with HIV/AIDS patients in Botswana.

In 2002, Baxter (The Least of These My Brethren: A Doctor’s Story of Hope and Miracles on an Inner-City AIDS Ward, 1997) traveled to the African nation to manage a new program intended to help the many thousands of Botswanans infected with HIV/AIDS. Brimming with “naïve altruism” and certain that his experiences treating HIV/AIDS patients in New York had prepared him for the task, he was soon confronted by a crisis more massive than he had imagined. The author observed his patients from a distance, dutifully pronouncing their lives to be even more important “than those of people in the States.” But his interactions with his patients soon made him see the “arrogance” of his attitude. One of Baxter’s first patients was Comfort, a 10-year-old girl suffering from malnutrition and an undiagnosed case of HIV. His intervention helped Comfort regain some of her health, but Baxter could do nothing to stop her family from letting her die because they considered her “an albatross, a burden.” To the author’s enduring shame, he realized that his “grand gesture” had been more important to him than Comfort’s fate. As he learned how to navigate cultural differences and dispense with his own egotism, Baxter also witnessed the many problems inherent in the Botswanan medical system, including shortages in qualified staff and medicines. He returned to the U.S. in 2008 believing he had come to “a new awareness about…the suffering that all of us endure.” Instead, he found American patients to be demanding and the American medical system “dysfunctional beyond words.” A second sojourn in Botswana helped him finally come to terms not only with his attitude toward the American medical establishment, but also the deeper, more personal meaning of his time in Africa. Rich in memorable patient portraits, Baxter’s book is at once a meditation on lives saved and lost as well as a testament to the challenges inherent in humanitarian work.

An honest, moving memoir giving voice to those without one.