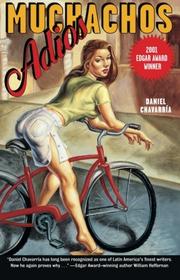 Uruguayan novelist and classics professor Chavarría turns from his scholarly studies of the origins of prostitution to a contemporary lab in his translation-into-English debut, the cat-and-mouse tale of a bicycle whore in post-Soviet Havana.

If there’s one thing Alicia wants, it’s not to be poor. So when Gorbachev turns a cold shoulder on his North American comrades, putting an end to her studies at the university, she makes a careful assessment of her assets—golden-blond hair, perky breasts, irresistible behind—then puts them on careful display on a secondhand bike. Her lovingly detailed technique is so foolproof that soon the house that she shares with her mother, Margarita, is filled to bursting with gifts from her new friends (the two ladies are too proud and independent to accept cash). Alicia, in fact, never takes money with her and never eats anywhere but home—until she meets Victor King, trade representative for a firm of Dutch treasure hunters who talks like Pancho Villa and looks like Mel Gibson. He’s so handsome that Alicia agrees to have dinner at his elegantly furnished home, where she and he have every kind of sex Chavarría hasn’t already catalogued. Alicia thinks she’s got it made; she’ll become mistress to this gorgeous hunk and never have to pedal the streets of Havana again—except that King wants her not for himself but for his wife, Elizabeth, who can only become aroused when she watches others. So Alicia agrees to put on well-paid shows for Victor and Elizabeth, copulating enthusiastically with a variety of men and the occasional knickknack—until King ups the ante once again, involving her in a kidnap plot that will either make her rich or ruin her.