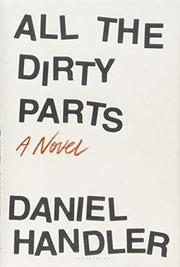 ALL THE DIRTY PARTS

Puerile portrayals of aroused teenage boys are nothing new in any medium, from 1980s sex comedies like Porky’s to novels like C.D. Payne’s Youth in Revolt (1993). But this interesting experiment by Handler (We Are Pirates, 2015, etc.) may be the most cleareyed and honest portrayal of the sexuality of adolescent boys in recent memory—it’s raw, authentic, fitfully funny, and tragic all at the same time. Our narrator is Cole, a high school student who's developed a well-earned reputation as a horndog in his school, as pointed out by his platonic frenemy, Kirsten: “I’m not talking about sex, Cole. I’m talking about how it’s one girl, and then it’s another.” It may be true, but Cole is also consumed by the topic in the way teenage boys typically are, lost in a flood of yearning, online pornography, and blinding lust. During a dry spell, Cole even starts fooling around with his best friend and masturbating buddy, Alec, with unforeseen consequences. But halfway through the school year, Cole meets Grisaille, an exotic and dangerous exchange student who is every bit a match for Cole and more. “She could snap you in two, Cole,” warns Kirsten. “She probably has, come to think of it.” It’s a slim volume, more stream-of-consciousness moments than true narration, but Handler has clearly put a lot of thought into what he’s trying to teach here. His prose can be laser-focused—one of Cole’s conquests is “crazy breathless Jesus Christ beautiful.” Yet he can still disarm on the fly with surprising humor: “Four years ago, I think, I thought anal sex just meant you were really particular about it.”

A disarming cautionary tale that’s just naughty enough to be kept from Handler’s Lemony Snicket fans but real enough to spark genuine conversations about sex and its consequences.