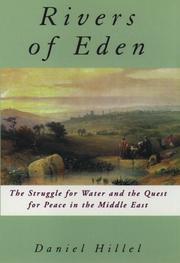 THE RIVERS OF EDEN

A timely, comprehensive, and often interesting argument that the most pressing issue the Middle East faces is not land and borders but rather the supply and distribution of the region's water. A soil scientist with extensive consulting experience throughout the world, Hillel (Plant and Soil Science/Univ. of Massachusetts, Amherst; Out of the Earth, 1990) reveals how, in one of the world's most strategic and parched areas, ecological considerations, particularly concerning water supplies, may influence geopolitics as much as summit meetings, police forces, and arms build-ups. Hillel focuses on the region's four great rivers: the Nile, the Tigris, the Euphrates, and the Jordan. He shows how a 1967 dispute between Israel and Syria over water rights was a contributing cause to the Six-Day War; how Iraq and Syria nearly came to blows with Turkey in 1990 over distribution of water from the Euphrates; and how there has been considerable tension between Jordan and Saudi Arabia over an aquifer (a water-bearing layer of permeable rock and a rare geological feature in the arid Middle East) from which both desert kingdoms draw. Hillel also suggests ways that nations can avoid disputes through intercountry and regional agreements, and he proposes various means of increasing water supplies and assuring effective use—e.g., desalination, cloud seeding, drip irrigation, and improved transmission (pipeline leakage wastes fully half the water intended for some Middle Eastern cities). This is an impressively interdisciplinary study that combines insights from geology, archaeology, etymology, biblical and other ancient Near East studies, modern history, soil science, agronomy, ecology, and contemporary political analysis. At times, Hillel floods the reader with highly technical data that will interest only hydrologists or other specialists. Generally, however, this is a clearly written, often colorful, accessible, and useful work of regional studies.