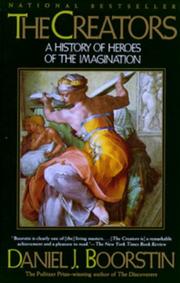 THE CREATORS: A History of Heroes of the Imagination

From the Pulitzer-winning former Librarian of Congress--a readable but often pallid counterpart to The Discoverers (1983), examining ""how creators in all the arts have enlarged, embellished, fantasized, and filigreed our experience."" Here, as in The Discoverers, Boorstin (Hidden History, 1987, etc.) paints a triumphal history that celebrates the march of human progress--from the Judeo-Christian tradition of a creator-God to the modernist exploration of the self in Proust, Kafka, and Virginia Woolf. Although he makes an admirable attempt to discuss Oriental and Muslim artists, most of the author's heroes are the usual stars of Western civilization: Thucydides, Dante, Shakespeare, Leonardo, Michelangelo, Bach, Dickens, Wordsworth, Eliot, and Picasso. Like Francis Parkman, Boorstin is a narrative historian who never lets ""his story become the victim of demography, sociology, or professional jargon."" Unfortunately, despite all his empathy for these often turbulently brilliant heroes, his ""stories"" reveal little more than familiar anecdotes. Moreover, in a dismaying change from The Discoverers, Boorstin rarely explains the synergy between his subjects and their society--for example, skipping the development of the novel between Cervantes and Balzac and thus providing little understanding of how this originally urban genre evolved. Worse still, this stepping-stone effect sometimes leaves him with only the most banal definition of an individual's landmark importance (""Beethoven was the first of the great musicians to be a public man, an advocate through his music on the issues of his time""). Boorstin's ability to connect his creators and the world that inspired and received their creations seems to have vanished. As always, Boorstin organizes his material lucidly and never loses sight of the human dimension. But, unaccountably, he has little to say here that's provocative, unorthodox, witty, epigrammatic, or illuminating--in short, there's little of the creative touch he alms to honor.