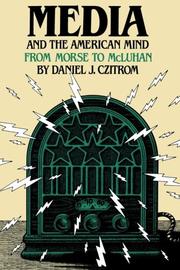 MEDIA AND THE AMERICAN MIND: From Morse to McLuhan

In effect: a compact, lucid guide to thinking about the media--even in outline, a rebuke to much tortured theorizing. Czitrom (History, Mt. Holyoke) first examines three new media--the telegraph, motion pictures, radio--in terms of their technological and institutional development, the response to them, and their cultural import. Thus, the ""telegraph promised a unity of interest, men linked by a single mind, and the worldwide victory of Christianity."" Via AP and Western Union, it also spawned a new, instantaneous, monopolistic news collection. Motion pictures ""created a new popular culture""--a point not original with Czitrom, but which he pursues via a review of: 1) the elitist Matthew Arnold/American middle-class view of culture vs. the democratic Emerson/Whitman vision; and 2) those aspects of the burgeoning movie business--the (dark) theaters, the (mixed) audience, the (unorthodox) film-content--that were perceived as a threat. Early radio, we're reminded, was the domain of amateur operators; also a medium of active particupation, not passive entertainment. But even after the advertiser-broadcaster link-up, broadcast entertainment would have a ""hybrid character that reflected a persistent cultural tension: the demands of the profit motive versus the residual power of traditional forms of popular culture."" (Witness the variety show, ""Amos n' Andy,"" the suspenser, the soaps.) Against this background comes the book's second, more unusual half: a consideration of three major traditions in communications theory. The Progressives (John Dewey, et al.) who first saw the press as social and cultural institutions, and potentially a beneficent tool; the empirical researchers (preeminently, Paul Lazars-feld)--and their critics (C. Wright Mills, the Frankfurt exiles); and radical of Canadian analysts Harold Adams Innis and Marshall McLuhan--of whom Czitrom provides a penetrating, caustic, critique. A trove of research findings and a fund of ideas.