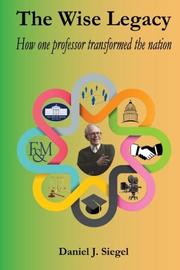 How One Professor Transformed the Nation

This tribute volume collects statements from and interviews with students, colleagues, relatives, and friends of Sidney Wise, an influential professor.

Sidney Wise was Charles A. Dana Professor of Government at Franklin and Marshall College in Lancaster, Pennsylvania. Upon Wise’s retirement in 1989, Rep. William H. Gray, a former student, paid tribute to him in the House, noting that “Dr. Sidney Wise represents the highest ideal of the small college teacher.” An engaging and inspiring professor, Sid was also known for helping to establish the system of political internships, a new idea at the time. Says a colleague, “As far as I’m concerned, [Sid Wise] invented networking.” Included in Wise’s network were many prominent figures in law, politics, business, and other fields. Those interviewed for this volume include Gray, Kenneth M. Duberstein (President Ronald Reagan’s chief of staff), Alfred Zuck (former assistant secretary of labor), and many others. Through his interviews, Siegel (Android Apps in One Hour for Lawyers, 2013, etc.) makes a broad, persuasive case for Wise’s contributions as a professor and mentor. Although Wise was a committed Democrat, students might leave his class never knowing his affiliation, and he helped students get into leadership positions regardless of party lines (and regardless of race or sex). Several contributors note that for Wise, politics was “the art of the possible,” practiced with a view toward compromise and, above all, civility. An undernote throughout this volume is rueful recognition of how unhappy Wise would be to see today’s deadlocked, partisan bickering. Also recalled in these pages are Wise’s love of film and his warm, gregarious nature. There is some repetition in these accounts and little consideration, given the celebratory nature of this book, of the troublesome side of networking and internships. But, as colleague John Vanderzell says, “to know Sidney was to love him,” and Siegel’s interviews make plain why this is so. The book itself is a labor of love and stands as a fine tribute to an unforgettable man.

Of greatest interest to those who knew Sidney Wise—but also a poignant reminder of a more civil political era.